Gamecocks slotted as No. 11 seed in SEC Tournament 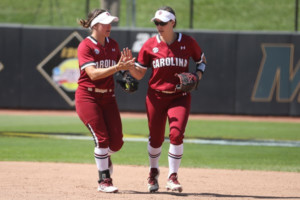 COLUMBIA, S.C. —- South Carolina softball will be the No. 11 seed in the SEC Tournament next week in College Station, Texas, the league office announced as the SEC Tournament bracket was finalized with the completion of games Sunday. The Gamecocks will face Florida in the opening round on Wednesday at 1:30 PM ET on SEC Network.

With 12 SEC wins on the year the Gators earned the No. 6 seed and will meet the Gamecocks for the first time in 2019 in a rematch of the 2018 SEC Tournament Championship.

Joining South Carolina on its side of the bracket is No. 7 seed Missouri and No. 10 seed Auburn. The winner of the Carolina game will face No. 3 seed LSU while the winner of the other contest will move on to play No. 2 Tennessee.

No. 12 seed Mississippi State will play No. 13 seed Texas A&M in the opening game of the tournament with the winner moving on to face No. 5 seed Ole Miss. No. 8 seed Georgia and No. 9 seed Arkansas will also meet on Wednesday on that side of the bracket. The victor in the Ole Miss game will move on to play No. 4 seed Kentucky while the winner of the other contest will face No. 1 seed Alabama.

LSU, Tennessee, Alabama and Kentucky were the four teams to earn first-round byes.

The SEC Championship is set for Saturday at 8:00 PM ET on ESPN2.