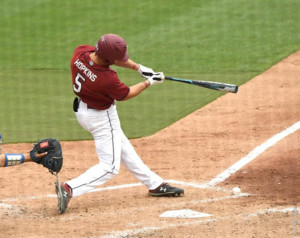 COLUMBIA, S.C. – The University of South Carolina baseball team fell to Kentucky, 6-2, to close out its home conference schedule. The Gamecocks took the series by winning the first two games of the series.

Kentucky took the lead for good in the fourth, scoring a run on a groundout and an unearned run on a sacrifice bunt. Then in the fifth, Ryan Shinn’s double made it 4-1. Kentucky scored a pair in the sixth, highlighted by T.J. Collet’s single to right. Carolina scored the game’s final run in the sixth as Hopkins singled and Jacob Olson brought him in with a double to left.

Daniel Lloyd earned the start for the Gamecocks and took the loss, allowing two runs on four hits with a strikeout and three walks. Wesley Sweatt pitched 2.1 scoreless innings, striking out a pair in relief. Zach Thompson earned the win for the Wildcats, striking out eight in a six-inning start.

Kentucky put up two runs in the fourth on just one hit to take a 3-1 lead it would not relinquish.

Carolina was outhit in the game 11-3 as Hopkins, Olson and Neville had a hit apiece on the day.

Carolina wraps up the home portion of its schedule Tuesday night against USC Upstate. First pitch is scheduled for 7 p.m. and it will be streamed on SEC Network +.