HORRY COUNTY, S.C. (WPDE) — The North Myrtle Beach woman accused of dumping and killing two of her newborn children into trash receptacles has been granted bond.

Alyssa A. Dayvault was arrested back in December and has been held at J. Reuben Long Detention Center since that time without bond on the charges of homicide by child abuse and desecration of a body, two counts each.

According to warrants, Alyssa A. Dayvault gave birth on or about Dec. 2 or 3, 2018 at her home on Oak Street in North Myrtle Beach.

The defendant was admitted to Grand Strand Regional Hospital on Dec. 5, where she complained of heavy vaginal bleeding, the warrants say; during treatment, she “delivered” a placenta and umbilical cord consistent with a full-term pregnancy, but no child was “delivered.” 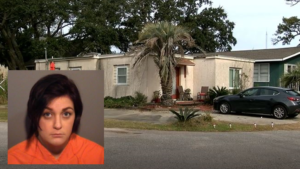 Police initially reported to Dayvault’s home because she had left the hospital before they could talk to her.

North Myrtle Beach police say Dayvault admitted she birthed a newborn male at her home and stated the child was born alive and took multiple gasping breaths after being born.

Dayvault failed to secure medical treatment for the newborn in “attempt to preserve or save the child’s life,” and disposed of the baby’s body in a public waste receptacle at her residence, which, police say, directly caused the death of the child.

Daywalt is also accused of doing the same thing to a female child she birthed in 2017 at an apartment on David Street in North Myrtle Beach.

During their investigation, NMBPD secured medical records showing that Dayvault went to North Strand ER for an illness on Nov. 4, 2017. During that visit, medical staff determined that she was in her third trimester of pregnancy with a healthy fetal heart tone. She admitted to delivering the child and disposing of it in a public waste disposal at the apartment complex in a post-Miranda interview, authorities allege.

On Dec. 11, NMBPD conducted a search warrant of Dayvault’s home, where they found the body of a baby boy. Investigators also asked for any medical records, labs or paperwork pertaining to child pregnancy, childbirth or abortion, a DNA swab and any bloody articles or clothing associated with childbirth. It was also established that Dayvault has two children currently, ages 6 and 8.

At her bond hearing Tuesday, the judge granted Dayvault bond in the amount of $35,000. Terms of her release include the inability to leave Horry County without permission from the court, she must be at her home between the hours of 7 p.m. and 6 a.m. every day, and she is not allowed to have contact with her two living children.

Dayvault’s attorney argued that there’s no evidence that either newborn wasn’t stillborn at the time of birth, though the solicitor says Dayvault admitted to the contrary in post-Miranda interviews with police.