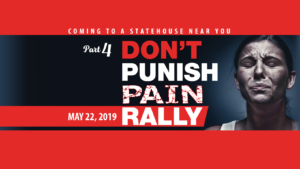 Organization officials say they are protesting the neglect chronically ill patients have experienced because of the new CDC guidelines, the DEA, and the FDA’s involvement.

This rally comes after reports of opioid deaths increasing in the Palmetto state.

According to the Associated Press, a report from the South Carolina Opioid Emergency Response Team released in January 2019, says the number of deaths from opioid use increased by 47 percent over three years from 2014 to 2017.