COLUMBIA, SC (WOLO)– Riverbanks Zoo is saying goodbye to some of its oldest residents.
A pair of elephants, 48-year-old Robin and 37-year-old Belle will be transferred to a new herd. 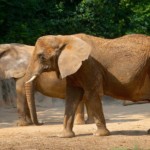 Riverbanks Zoo officials say they are working with the Association of Zoos and Aquariums’ (AZA) African Elephant Species Survival Plan, to find the elephants a larger, more social environment.

According to officials, Belle came to Riverbanks from Columbus Zoo in 2001 and Robin in 2007 from Disney’s Animal Kingdom. The two are among 13 African elephants that have lived at the Zoo since 1973.

“The decision to move Robin and Belle was not easy, but it is the right decision for the animals and Riverbanks,” said John Davis, Director of Animal Care and Welfare at Riverbanks Zoo and Garden. “There is no doubt that Robin and Belle will be missed by our staff, our members, and the community.”

Zoo officials say the move will make way for the return of the Southern White Rhinoceros.

According to Zoo officials, The International Union for Conservation of Nature (IUCN) estimates less than 22,000 individuals remain in the wild most of which are found in the grasslands of southern Africa. Northern white rhinos are now extinct in the wild because of poaching.

“We are excited to give our guests the opportunity to connect and interact with these magnificent creatures that, without us, face an uncertain future,” said Thomas Stringfellow, President and CEO of Riverbanks Zoo and Garden. “By bringing white rhinos back to Riverbanks, we have a great opportunity to contribute to the sustainability of this species.”

Elephants could eventually return, but Zoo officials say they would need additional space.

The Zoo is planning special activities for the public before Robin and Belle move, beginning with World Elephant Day on August 12. Guests will also have an opportunity to sign a farewell card that will be sent with the animals to their new home.

The Southern White Rhino exhibit is scheduled to open in the summer of 2020.