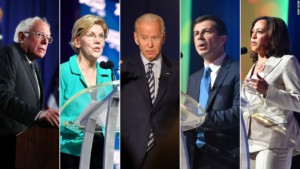 Much of Warren’s bump came from those Democratic voters who consider themselves “very liberal.” Four in 10 said they would support her in the most recent poll, up from 29% in July.

Biden continues to pace the field for the candidate who would be the best leader (33%), but Warren has gained since Quinnipiac’s last poll (up from 17% in July to 22%). Warren also gained in supporters who said she has the best policy ideas (up from 26% in July to 32%), while 17% said Biden and 16% said Sanders.

Regardless, half still think Biden has the best chance of winning against Trump in 2020. Democratic voters slightly prefer a candidate who is more electable (50%) over someone who shares their views (46%). The opposite was true last time the question was asked in March (51% said shares views, 45% most electable).

Warren is also considered to be the one who “won” the debate, according to Democrats and Democratic-leaning independent voters who watched, listened or paid close attention to the debates. Fewer, 15%, said Biden did the best job, 8% for Sanders and Harris each, 7% said Booker, 4% Buttigieg, 3% Gabbard and 2% each name O’Rourke, Yang and Williamson.

The Quinnipiac University poll of Democrats and Democratic-leaning independents was conducted by telephone August 1 through 5 among a random sample of 807 registered voters. Results among the Democratic sample have a margin of sampling error of plus or minus 4.1 percentage points.