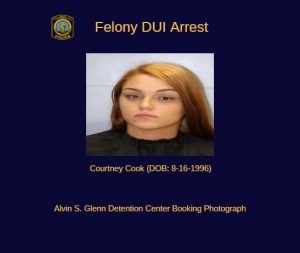 COLUMBIA, S.C. (WOLO) — The Columbia Police Department has arrested one woman in connection with a fatal accident involving a pedestrian at the intersection of Bluff Road and George Rogers Boulevard on Tuesday night.

Cook was allegedly driving a 2003 Mitsubishi Outlander when she collided with a 76-year-old man causing fatal injuries at the 900 block of Bluff Road.

The victim has been identified by Richland County Coroner Gary Watts as 76-year-old John David Bowen.

Bowen died at the scene.  An autopsy indicated that the cause of death was due to blunt head trauma.

The preliminary investigation conducted by the CPD indicates that Cook was traveling eastbound on Bluff Road when she allegedly struck Bowen who was walking in the roadway. Cook has not appeared in bond court yet.