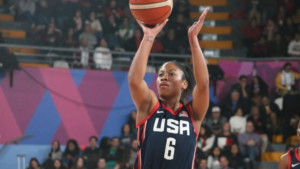 COLUMBIA, S.C. – South Carolina women’s basketball senior Tyasha Harris collected her third international medal with USA Basketball as the U.S. brought home a silver medal from the 2019 Pan American Games in Lima, Peru, after a 79-73 loss to Brazil in the title game. The back-and-forth game came down to a 10-4 run late in the fourth quarter that established the first double-digit lead for either team, which the U.S. could not get past.

“We have to go home with the silver,” Harris said after the final game,” but it was a great feeling to come together for these last two weeks. We have been playing hard and practicing hard. We’ve been trying to adjust to the coaching staff, and it was fun while it lasted.”

Three of the U.S.’s five games in the 2019 tournament were decided by single digits, including a tight 62-59 semifinal win over Puerto Rico to set up the gold medal contest. Overall, the U.S. women are now 82-16 all-time in Pan Am Games history, capturing seven gold medals, six silvers and two bronze medals.

Harris scored in double figures in three of her five games as a starter for the U.S., including 14 in the gold-medal game. She finished the tournament with 9.0 points and a team-best 3.0 assists per game. Her perfect 11-of-11 shooting at the free throw line led all players in the tournament, and her 1.67 assist-to-turnover ratio was second-best among the field. In three international appearances with USA Basketball, Harris adds this Pan Am silver medal to a silver in the 2017 FIBA U19 World Cup and a gold medal from the 2016 FIBA U18 Americas Cup.

For all South Carolina women’s basketball updates, continue to check back with GamecocksOnline.com or follow the team on social media (@GamecockWBB). For season ticket information, visit ItsGreatToBeAGamecock.com.