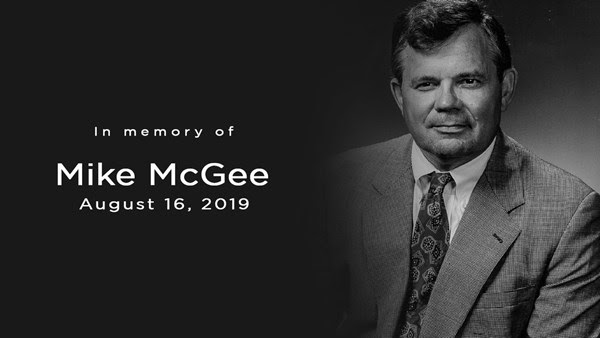 “I owe so much to Dr. McGee for trusting me to lead his baseball program when he hired me in the summer of 1996,” said current Gamecock Athletics Director Ray Tanner. “I learned so much from him about athletics, administration and life, in general. He’s not only a legendary coach and administrator but a Hall of Fame person as well.”

McGee, 80, came to South Carolina in 1993 from the University of Southern California, where he had served as athletics director 10 years. Prior to his tenure at Southern Cal, McGee was the athletics director at Cincinnati (1980-84) , the head football coach at Duke for eight seasons (1971-78), the head football coach at East Carolina for one season (1970) and served as an assistant coach at Minnesota, Wisconsin and Duke.

McGee was the recipient of the prestigious Homer Rice Award in 2016 from the LEAD1 Association, given each year to a former athletics director who had made a significant and meaningful contribution to intercollegiate athletics.

In 2002, McGee was presented the Order of the Palmetto by then-South Carolina Governor Jim Hodges, recognizing him for his outstanding contributions to the promotion of and achievement in sports in South Carolina.

McGee, a 1960 Duke graduate, was an outstanding football player for the Blue Devils, earning All-America honors and was named the 1959 Atlantic Coast Conference Football Player and ACC Athlete of the Year. He was also the recipient of the 1959 Outland Award, going to the nation’s top lineman. He was inducted into the National Football Foundation and College Hall of Fame in 1990.

In 1985, he founded and directed for 17 years, the prestigious Sports Management Institute, the leading in-service training academy for professional staff in intercollegiate athletics.McGee is survived by his wife of 56 years, Ginger, and together they had four children – Kathy, Michael, Jr., Matthew and Jerry – as well as 19 grandchildren and four great grandchildren.

Services and burial for Dr. McGee will be held at Sonrise Mountain Ranch in Cimarron, CO and his hometown of Elizabeth City, NC.