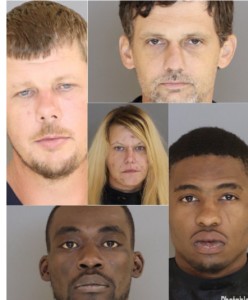 Sumter, SC ( WOLO) —- The Sumter Sheriff’s office has taken five people into custody after officials say they were caught in a drug bust. According to authorities about 90 grams of methamphetamine, 33 grams of marijuana and several other drugs were seized from a residence located inside the A & J Mobile Home park. Authorities say deputies executed a search warrant and arrested five people during that drug bust Friday.

Authorities tell ABC Columbia News Butler, Ward and Laney each face additional charges for Possession of a Weapon during a Violent Crime. All three were denied bond.  Evans and Watford were both given a $15,000 surety bond.

President Trump threatens to relocate 2020 GOP convention out of NC

Crowds flock to beaches for Memorial Day Weekend despite pandemic