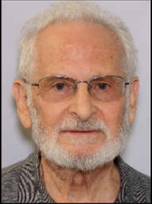 He is believed to be driving a 2013 dark blue Hyundai Elantra with the license tage MUV-321.

If you know where he is call SLED or the York Co. Sheriff’s Office