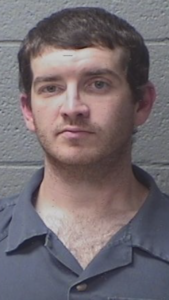 LEXINGTON, S.C. (WOLO) — The Lexington Police Department is asking for the public’s help in finding a 32-year-old suspect of Orangeburg involved in an indecent exposure incident on Tuesday morning.

Larry Brown was identified as the suspect in the indecent exposure case and he has also been charged with Failure to Obey Police, Failure to Stop for Blue Lights, Defective Brake Lights and two counts of Reckless Driving.

Officers were dispatched to the Lexington Place shopping center parking lot around 10:35 a.m. to meet with a female victim regarding the incident exposure incident.

When an officer arrived, the victim stated that as she was walking to her vehicle from a store, she noticed that there was vehicle with a white male driver parked beside her vehicle in the parking lot. As she walked beside his vehicle, she observed that he had his pants down exposing his genitals while gesturing in a sexual manner.

When he noticed that the victim had seen him, the driver covered himself up and drove his vehicle to a nearby parking space where he remained until the officer arrived. When the officer walked up to the vehicle to make contact with driver, he drove away from the scene.

Within minutes, another officer observed the vehicle and when he attempted a traffic stop, the driver did not stop and fled from the officer. Due to department policy and out of caution for the safety of the public, officers did not pursue the vehicle.

Anyone who knows of the whereabouts of Larry Brown is asked to contact the Lexington Police Department at 803-359-6260 or CrimeStoppers.