Deputies: no shooting at State Fair 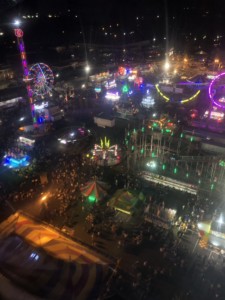 Several fair-goers reported hearing what sounded like gunshots prompting peoople to run for the exits.

Richland County deputies say there was not a shooting.

No word on where the sounds came from.

“Earlier tonight (Oct. 12) – The SC State Fair experienced young adults running through the grounds in waves, which created a disruption and understandably anxiety for our patrons.

“We have confirmed with several area law enforcement agencies that no shots were fired on the fairgrounds and, fortunately, no serious injuries occurred.

“Law enforcement was able to bring the situation under control in a timely manner and in an abundance of caution, we decided to close our Midway at 11 p.m.

“We are very grateful for the efforts of the Richland County Sheriff’s Department and the South Carolina Highway Patrol.  We will remain diligent in our efforts to maintain the highest customer safety standards that fairgoers have become accustomed to.

“As with all our other security measures, our youth admission policy remains in place, and we will continue to stringently enforce that policy.”