Winters are Getting Warmer in the U.S.

Winters are getting warmer in the United States. See the map below. It shows the average winter temperature change in the United States over the past 50 years. The most dramatic warming is happening in the eastern and northern part of the country – where some places are now as much as 7 degrees warmer than in the the early 1970’s. Here in Columbia, it’s about 3 degrees warmer. 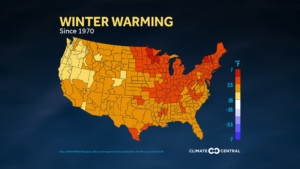 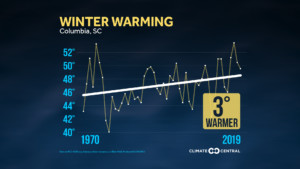