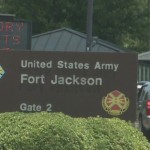 According to investigators, Cortes suffered a medical emergency during training while doing a non-strenuous activity.

Fort Jackson medical officials say they took him to an off-post hospital, where he was pronounced dead before 9:30 p.m.

Fort Jackson Commander Brigadier General Milford Beagle, Jr. says, “Our deepest sympathies go out to the families, friends and teammates of this soldier.”

The cause of his death remains under investigation.