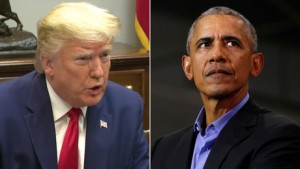 (CNN)—- An official portrait unveiling for former President Barack Obama at the White House isn’t expected to occur anytime soon as his successor, President Donald Trump, accuses him of unsubstantiated and unspecified crimes.

NBC News first reported on the apparent end of a long tradition of first-term presidents hosting their immediate predecessor at the White House to unveil an official portrait. People familiar with the matter said such an event wasn’t currently on the calendar — and may not occur at all while Trump remains in office.
An administration official said there have been some discussions between the White House and Obama’s team to hang the portrait but no date was ever officially scheduled.

“Presidential portrait unveilings are one of the three events that bring former presidents together. This level of animosity between a sitting president and his predecessors is unprecedented in modern history,” Kate Andersen Brower, author of “Team of Five: The Presidents Club in the Age of Trump,” told CNN.

President Trump and President Obama have met only once in person since Inauguration Day, at the funeral for former President George H.W. Bush in December 2018. They shook hands briefly at the start of the service but didn’t interact for the remainder of the day.
The chilly encounter encapsulated Trump’s uneasy position in the President’s Club, which is typically marked by apolitical comity even between onetime political rivals

Brower asked Trump in an Oval Office interview whether he would go to the opening of Obama’s presidential library, which is still years away.

“He probably wouldn’t invite me. Why should he?” Trump said, Brower writes in her book.

One of the traditional set-pieces of the club is the portrait unveiling in the White House East Room, which in the past has occurred sometime in a new president’s first term. Obama hosted George W. Bush in 2012; Bush hosted Bill Clinton in 2004; Clinton hosted George H.W. Bush in 1995; and the elder Bush hosted Ronald Reagan in 1989.
First ladies also attend the ceremony and their portraits are unveiled as well.

In 2012, ahead of Bush’s portrait unveiling, first lady Michelle Obama told aides the event and accompanying meal “needs to be perfect,” Brower reported in the book.

“It was the first time they had been back to the house they had lived in for eight years. The residence staff, at Michelle Obama’s direction, had a long table set in the elegant Red Room, on the State Floor, for the Bushes’ large extended family. Fourteen Bushes had a meal together and were served by the same butlers who had attended to them for years in the upstairs residence,” Brower wrote.

Trump’s first term will end next January, and neither Obama nor Michelle is expected to participate in a portrait unveiling before then, according to people familiar with the matter. If Trump wins reelection in November, it’s not clear the Obamas would return to the White House for a portrait ceremony during his second term either.

Both the White House and representatives for Obama declined to comment.

Trump has lashed out at his predecessor in unprecedented fashion over the past three-and-a-half years, most recently alleging he may have committed a crime (though, when pressed, Trump has been unable to voice the exact nature of the alleged criminal activity).

Obama, while not explicitly criticizing the President’s handling of the current coronavirus pandemic, took lightly veiled swipes at how the crisis has been handled during nationwide commencement addresses on Saturday.

The open enmity between the current and most recent president is all but unprecedented and does not appear poised to dissipate as Trump battles Obama’s vice president, Joe Biden, in this year’s presidential contest.

The portrait unveiling appears to be a victim of the discord. Under a process administered by the White House Historical Association, presidents and first ladies typically choose a portraitist before leaving the White House. Sittings and final approval of the paintings occur afterward.

While the Obamas were deeply involved in a separate pair of portraits that hang at the National Portrait Gallery in Washington, the state of their official portraits that would hang alongside those of past presidents and first ladies in the White House isn’t clear.

On its website, the White House Historical Association says all presidents since Jimmy Carter — who asked not to have a ceremony — have returned to the White House for an unveiling.

“These ceremonies are often bipartisan events with warm greetings and collegial speeches exchanged by the president and their predecessor,” the website reads.

How COVID-19 impacts those battling cancer