A look at Saturday’s violent protest in Columbia 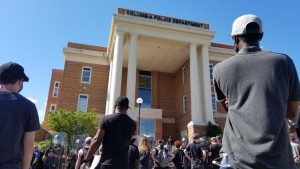 The protest began peacefully, with a march to the State House from City Hall. Thousands listened as speakers talked about police brutality, and honoring the unarmed African Americans who have lost their lives in recent weeks, especially George Floyd which sparked the protests nationwide.

Officials say three RCSD deputies were injured as part of the protest, along with nine Columbia Police officers. Injured deputies were treated on scene.

Both agencies are investigating two shooting incidents, including one where RCSD deputies were shot at while at the corner of Gervais and Assembly streets. There were rumors that RCSD Sheriff Leon Lott was shot at, but that is not true, according to deputies.

Deputies are looking for three potential suspects in response to that shooting, but no descriptions are available at this time.

Anybody with any information concerning the shootings is asked to call Crimestoppers at 888-CRIME-SC.

Additionally, there was an incident at the Target on Two Notch Road, where an estimated 30 would-be looters attempted to break in by smashing the glass of the front door. Deputies responded to the scene, and the crowd scattered. No arrests were made in that incident.