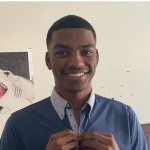 Officials say he was reported missing after he was last seen at his home on Legion Drive on August 1 around 1 a.m.

According to investigators, he has a medical condition that could’ve threatened his life if he wasn’t found quickly.

Deputies say he is now safe.