50,000 allowed back home as gains made on California fires 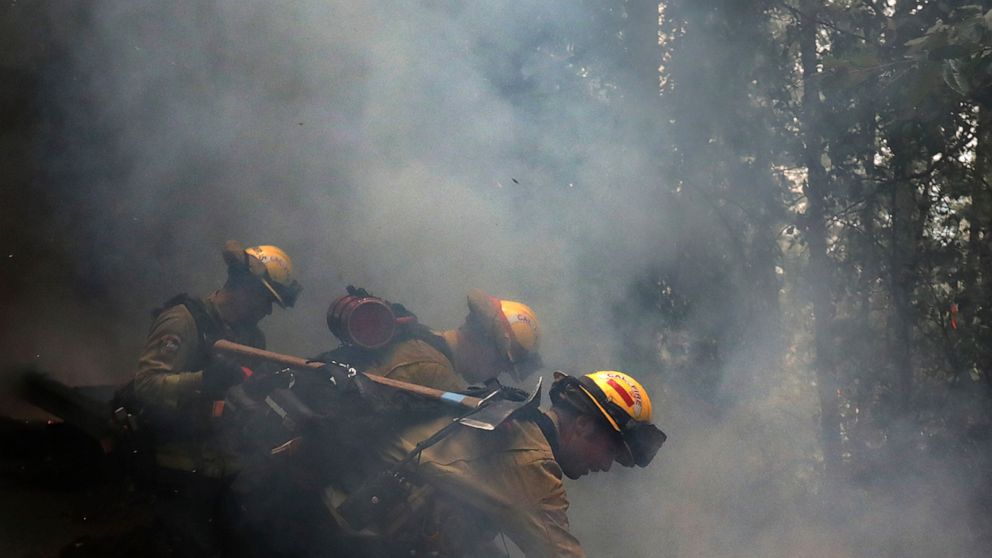 (Shmuel Thaler/The Santa Cruz Sentinel via AP) — A California Department of Forestry and Fire Protection crew is engulfed in smoke while tending a back burn near Felton, Calif., Wednesday, Aug. 26, 2020, as a CZU Lightning Complex fire continues to burn.

(Shmuel Thaler/The Santa Cruz Sentinel via AP) -- A California Department of Forestry and Fire Protection crew is engulfed in smoke while tending a backburn near Felton, Calif., Wednesday, Aug. 26, 2020, as a CZU Lightning Complex fire continues to burn.

SAN FRANCISCO, C.A., (AP) — More than 50,000 people forced to flee their homes were allowed to return by Thursday night as firefighters made progress in their effort to put out massive and deadly wildfires in Northern California.

Officials were working on plans to repopulate other evacuated areas. Cooler weather and higher humidity, along with an influx of equipment and firefighters, continued to help hard-pressed crews fighting some of the largest fires in recent state history, burning in and around the San Francisco Bay Area.

Evacuation orders for more than 20,000 people were lifted over the past 24 hours in San Mateo and Santa Cruz counties, where a massive blaze caused by lightning was 24% surrounded, fire officials announced.

“I think we’re going to have good news day to day,” he added.

The fire has burned at least 516 homes but the tally could rise. Inspection teams were struggling to get into remote areas because bridges were damaged and roads blocked by fallen trees and power lines, fire officials said.

Solano County, north of San Francisco, began allowing people back home on Thursday. In the heart of wine country, evacuation orders in Napa and Sonoma counties were lifted Wednesday for about 35,000 people who had been told to leave after lightning ignited dozens of blazes last week.

Firefighters and utility workers were clearing areas for returning residents after crews increased containment of the massive cluster of fires north of San Francisco to about 33%.

That fire, the site of five of the deaths, still threatened 30,500 homes and other buildings after destroying more than 1,000.

In the eastern San Francisco Bay Area, a fire that has burned in seven counties gained a relatively modest amount of ground — less than 1.6 square miles (4.1 square kilometers) — and was 25% surrounded.

Around the state, hundreds of wildfires — coming months earlier in the season than expected — have already burned more than 2,000 square miles (5,200 square kilometers) and pushed firefighter resources to the breaking point, prompting some residents to form crews and fight them on their own.