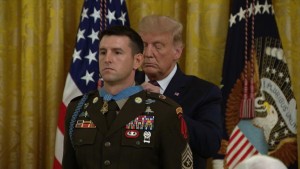 WASHINGTON (WOLO, AP) – President Donald Trump has bestowed the Medal of Honor on a U.S. soldier for his role in a daring 2015 mission to rescue dozens of hostages set to be executed by Islamic State militants in Iraq.

Sgt. Maj. Thomas “Patrick” Payne, a Batesburg-Leesville native, received the medal of honor today for his heroism during the raid that liberated 75 Iraqi civilians.

He was assigned to lead a team clearing one of two buildings known to house hostages in a nighttime operation in the northern province of Kirkuk.

Payne and his team faced a barrage of gunfire, militants exploding suicide vests and stifling smoke as they rescued hostages from a burning building.

He was initially given the Army’s second-highest award, the Distinguished Service Cross, which was upgraded to a Medal of Honor.

Payne made the decision to join the Army following the September 11 attack. Payne is not the first midlands native to earn the award.

Kyle Carpenter of Gilbert was given the award back in 2014.