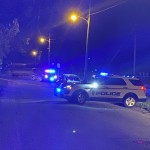 Officials say the shootings happened on Edgewood Avenue and McAlister Street around 4:30 a.m.

According to investigators, the three victims all suffered non-life threatening injuries to their lower bodies.

Police say no suspects have been identified and they’re working to see if these shootings are related or not.

If you have any information, please submit a tip to Crimestoppers at crimesc.com.