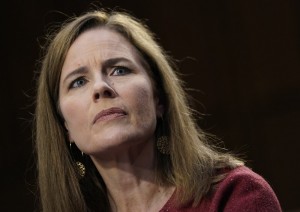 She declined to say on Tuesday whether or not she would recuse herself from any post-election disputes that might arise from the Nov. 3 election between President Donald Trump, the man who nominated her, and Democrat Joe Biden. More generally, she said she admires the conservative late Justice Antonin Scalia, but “you would be getting Justice Barrett.”

On the second day of her hearings, the mood shifted to a more confrontational tone at the Senate Judiciary Committee.

Barrett says she doesn’t consider the high court’s Roe v. Wade decision on abortion a “super-precedent” that can’t be overruled.

Barrett says the court’s 1973 ruling that affirmed the right to abortion isn’t in the same category as the Supreme Court’s 1954 Brown v. Board of Education ruling, which declared segregated public schools unconstitutional. She says no one talks about overturning the Brown decision. But she says all the questions she’s gotten in her confirmation hearing Tuesday about her views of abortion “indicates Roe doesn’t fall in that category.” She says it’s “not a case that’s universally accepted.”

Americans flock to the polls in record early voting numbers