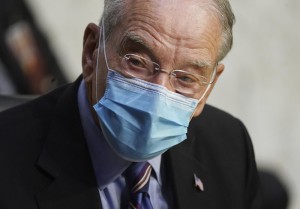 In this Oct. 12, 2020 file photo, Sen. Charles Grassley, R-Iowa, listens during a confirmation hearing for Supreme Court nominee Amy Coney Barrett before the Senate Judiciary Committee, on Capitol Hill in Washington. Grassley, the longest-serving Republican senator, says he is quarantining after being exposed to the coronavirus. Grassley is 87. He did not say how he was exposed. (Kevin Dietsch/Pool via AP)

WASHINGTON (AP) – Iowa Sen. Chuck Grassley, the longest-serving Republican senator and third in the line of presidential succession, says he has tested positive for the coronavirus.

The 87-year-old Grassley had said Tuesday morning that he was quarantining after being exposed to the virus and was waiting for the results of a test.

On Tuesday evening, he tweeted that he had tested positive.

He did not say how he was exposed.

He was in the Senate and voting Monday. By missing votes Tuesday, Grassley broke a 27-year streak of not missing a single Senate vote.

Your guide to navigating those awkward political dinner conversations this Thanksgiving

Jeopardy to be hosted by series of guests, beginning with Ken Jennings