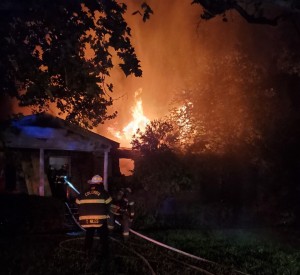 COLUMBIA, SC (WOLO)– Shortly before 10 p.m. Tuesday, the Columbia Fire Department says crews were dispatched to the 7300 block of Two Notch Road for a house fire. Once on the scene, crews reported flames coming through the roof of the home. Authorities say firefighters were able to force there way through the front door and put the fire out.

Officials reported no injuries and say the house was vacant.