Marking the solemn anniversary of the September 11th attacks 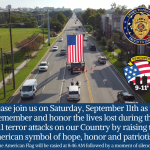 COLUMBIA, SC (WOLO)– The Midlands and the Nation are honoring the lives lost and the heroes made in the September 11, 2001 attacks.

Here is a list of some of the ceremonies and events in the Midlands:

8:00am 9/11 Morning of Remembrance Ceremony at the Columbia Metropolitan Convention Center in Columbia

8:46am The City of Cayce and Cayce Department of Public Safety officers will honor the lives lost during the 9/11 terror attacks by raising the American Flag over the Blossom Street Bridge.

9:11am  The Sumter Police Department and Sheriff’s Office are holding a ceremony to commemorate 9/11.
Where-City of Sumter’s Public Safety complex on North Lafayette Drive.

The Guard says the 169th Fighter Wing flies the F-16 Fighting Falcon jet, a single-seat, multi-purpose fighter with the ability to fly up to twice the speed of sound. It is capable of performing air-to-air and air-to-ground tactical missions.