Nikki Haley to serve on Clemson’s Board of Trustees 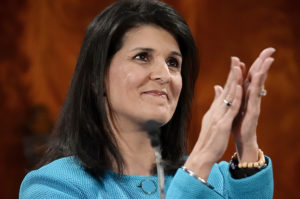 South Carolina Gov. Nikki Haley applauds members of the gallery before delivering her State of the State address to the joint session of the legislature Jan. 21, 2015, at the Statehouse in Columbia, S.C. (AP Photo/Richard Shiro)

COLUMBIA, SC (WOLO)– Former South Carolina Governor Nikki Haley will serve on the Board of Trustees at her alma mater. Tuesday, Clemson University announced Nikki Haley was selected to fill the seat left vacant by David Wilkins, who is retiring.

Haley graduated from Clemson in 1994.

In addition to her time as governor, Haley also served as the U.S. Ambassador to the United Nations.