COLUMBIA, SC (WOLO)– According to Acting United States Attorney M. Rhett DeHart, a gang member from Columbia was sentenced to 30 months in federal prison after pleading guilty to a firearm charge. Authorities say 26-year-old Kevin Shacqile Roney, also known as “Kevo” and “Valentine Roney,” plead guilty to being a felon in possession of a firearm and ammunition. 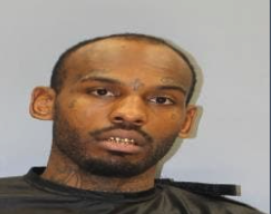 According to investigators, officers saw an individual stash something underneath bushes adjacent to a parking lot in the Five Points area at around 1:15 a.m. on August 18, 2019. Officers say they discovered that the item was a loaded 9 mm handgun. Officials say the man, later identified as Roney, was arrested after officers set up surveillance when Roney returned to retrieve the gun. According to authorities, Roney admitted to stashing the gun in the bushes. Authorities say they also discovered Roney brandishing a firearm in a video posted on social media in May 2020.

Authorities say Roney was prohibiting from possessing firearms due to past convictions. According to officials, Roney has previously been convicted of unlawful carrying of a weapon, burglary third degree and assault and battery second degree.