Consumer News with ABC Columbia is brought to you by Grow Financial.

ABC NEWS– The government’s new inflation report showing prices rising at the fastest pace in four decades is causing alarm on Wall Street and in Washington. The Federal Reserve is expected to respond by raising interest rates next month. That’s a move that could dent Americans’ budgets amid already sky-high prices. ABC’s Elizabeth Schulze has the latest from Washington.

CNN– Two democratic members of the Senate Intelligence Committee have raised concerns about information on Americans gathered by the CIA. A letter by Senators Ron Wyden and Martin Henrich written in April of last year summarizes those concerns. They found the CIA secretly gathered information on Americans that was collected incidentally as part of foreign surveillance programs. The senators referred to the information gathering as “warrantless backdoor searches of Americans.” The CIA has not revealed exactly what information it has, but says all its collection activities have been conducted in compliance with U.S. law.

COLUMBIA, SC (WOLO)– Recent graduates, certified teachers, media specialists and counselors are invited to Orangeburg for a career fair. The Orangeburg County School District will have interviews Saturday, March 5, starting at 9 a.m. until noon at their new library on Russell Street. Those interviews will be conducted on the spot, and top candidates may even walk away with an employment contract in hand for the 2022-2023 school year. 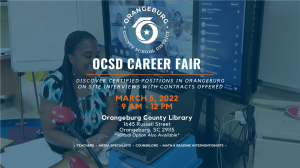 “We’re fortunate to offer both in person and virtual options this year, and are hoping to have a good turnout.,” Ernest Holiday, Assistant Superintendent for Human Resources, commented. “This is a great opportunity to ask questions and meet current members and leaders of the OCSD team. We know there are many people looking for something more than just a job, and they can find meaningful work, a supportive culture and a career path here at OCSD.”