Teacher pay at the center of heated state senate debate 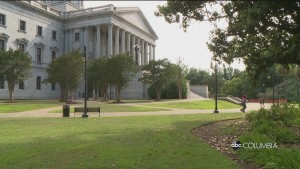 Columbia, SC (WOLO) — Pay for South Carolina’s teachers is at the center of a heated budget debate in the state senate.

According to the The Post and Courier reports lawmakers in the Senate Finance Committee unanimously adopted a $12.6 billion dollar spending plan Wednesday.

However, the Senate version does not include the $1,500 one time bonus for State employees that’s included in the House version.
Senators also want to raise starting teachers wages to 38 thousand a year compared to the 40 thousand in the House’s budget proposal.

Both the Governor’s Office and the Palmetto State Teachers Association agree that the Senate’s teacher pay proposals are not high enough.