Ever Wonder – What’s the Tallest Wave Ever Recorded?

So how tall was the tallest wave ever recorded?  Would you believe 500 feet!!  Yes, 500 feet!!  That happened back in July 1958 a huge earthquake rocked Alaska.  This caused a huge landslide, which in turn triggered a gigantic tsunami that plowed through Lituya Bay – a narrow bay that helped funnel the water up.  Once the wave crashed on land, the water reached an astonishing 1700 feet above sea level – that’s as high as the top of the antenna on the Sears Tower (now known as the Willis Tower) in Chicago!   You can read all about it here:  What’s the tallest wave ever recorded on Earth? (msn.com) 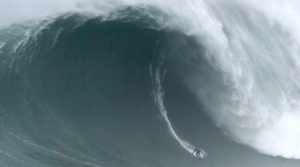