Aprils are Getting Warmer Here

Temperatures across the planet are warming.  And that’s consistent with what’s happening here in Columbia.  The average temperature for the month of April in Columbia has increased by roughly 2.5 degrees since 1970.  This increase is caused by us humans – primarily because we’ve been digging up fossil fuels (coal, gas, oil, etc.) and burning it for over 100 years.  As we burn the fossil fuels, heat-trapping gases are released into the atmosphere. 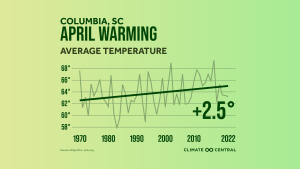