State Department of Ed. awards 2023 Teacher of the Year 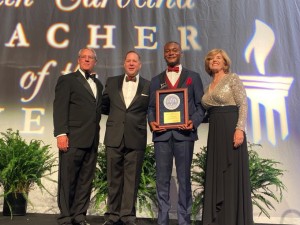 Columbia, SC (WOLO) — Just in time for Teacher’s Appreciation week, one South Carolina Educator is being honored for the work he’s done in and outside of the classroom.

Wednesday night, South Carolina Superintendent of Education Molly Spearman announced the Teacher of the Year during the annual gala. This year, Deion Jamison who is an English Teacher at Legacy Early College has been named as the 2023 Teacher of the Year.

“Deion exhibits the qualities and characteristics that we want to see in every current and future South Carolina educator,”… “He is so deserving of this tremendous honor, and I know he will do a fantastic job advocating and representing our over 55,000 teachers this next year.”

According to the Department of Education, Jamison has wanted to be an educator his entire life. A passion that only became even more intense once he says he saw disparities between different school districts in South Carolina. Jamison saying that “education is liberation and teaches his students skills such a collaboration, critical thinking and problem solving to address the world’s most pressing issues.”

Jamison is no stranger to getting attention for the work he does. He has been recognized on the national level through his work with the National Council of Teachers of English , and under Teach for America where he was given the Early Career Educator of Color Leadership Award. He is also the recipient of the Sue Lehman Excellence in Teacher Leadership Award.

Still, with all of the awards, honors and accolades achieved over the years, Jamison says creating spaces for students that afford them equity in education.

To celebrate the new title he will hold one school year, Jamison will receive $25,000 dollars and a BMW that he will be able to drive for the next year. Over the course of the next year, Jamison will be working with other educators, teaching cadets, leading the State Teacher Forum, and acting as the state spokesperson for more than 55 thousand others in the education field.

Fireworks return to Lake Murray for the 34th time