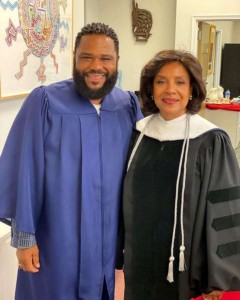 Image: anthonyanderson/Instagram
Anthony Anderson poses for a portrait with Phylicia Rashad after his graduation

Image: anthonyanderson/Instagram Anthony Anderson poses for a portrait with Phylicia Rashad after his graduation

The “Black-ish” alum, 51, shared an inspiring message Sunday on Instagram celebrating his graduation from Howard University this weekend.

“To quote Biggie, ‘IT WAS ALL A DREAM!'” he wrote. “Words can’t begin to describe the emotional roller coaster I’m on right now. It’s literally been 30 years in the making.”

“This spring I was finally able to complete the work to graduate from Howard University with a BFA degree from the Chadwick A Boseman College of Fine Arts!” Anderson continued. “Yesterday was a full circle moment. It’s never too late! Things happen when they’re supposed to happen!”

The “Law & Order” star went on to thank the people who helped him accomplish this milestone, including Phylicia Rashad, with whom he shared a photo in the slideshow.

Rashad was named dean of the Chadwick A. Boseman College of Fine Arts in May 2021. The school is named after the late “Black Panther” actor who graduated from Howard University with a bachelor of fine arts in 2000 and returned to serve as commencement speaker in 2018. Boseman died in August 2020 at the age of 43 after a private, yearslong battle with colon cancer.

Anderson also shared a photo of him alongside Taraji P. Henson, who served as Howard University’s commencement speaker this year.

The actor went on to thank his son, Nathan, who he said inspired him to “return to school to finish my degree after he was accepted into Howard University.”

Anderson concluded the post with one final uplifting message, writing, “This is just the beginning!”

Local Living: Meet Leroy, our pet of the week