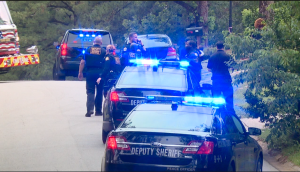 COLUMBIA, S.C. (WOLO) – The Richland County Sheriff’s Department is investigating a shooting that left one teenager dead and another injured.
According to deputies, they were called to the 300 block of Saddletrail Road just after 5 p.m. on Saturday, May 21 for reports of a shooting. Police say once on scene, officers found a 17-year-old and 18-year-old with gunshot wounds, both were rushed to the hospital where the 17-year-old died from his injuries.
The Richland County Coroner confirms the victim is identified as Bertrand T. Ganaway III of Columbia, SC.
This is an ongoing investigation. Anyone with information about this incident is asked to submit tips to Crime Stoppers at crimesc.com. They may remain anonymous.
Categories: Local News, News
Tags: Deadly Shooting, Richland County Sheriff’s Deparment, Saddletrail Road, Shooting, teen shooting
Share