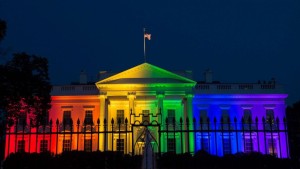 (ABC News) —The White House says it will celebrate Pride Month this June by signaling support for the LGBTQ community and their families amid a wave of anti-LGBTQ legislation.

There have been more than 300 anti-LGBTQ bills proposed in at least 28 states this year, according to the Human Rights Campaign.

Eight states have signed such bills into law this year.

President Joe Biden has condemned the rapid spread of these bills.

“These bills are targeting kids in classrooms and families in their homes, which is why this Pride Month we will be focused on protecting, uplifting, and supporting LGBTQI+ children and families,” a White House spokesperson said about Biden’s Pride plans.

Many of the bills or policies target LGBTQ youth. In some cases, like in Alabama, families and healthcare providers of transgender youth can be criminalized for providing gender-affirming care.

A growing number of states have introduced legislation that LGBTQ advocates say targets transgender youth and their access to school sports and gender-affirming health care.

To combat such legislation, the Biden administration is calling on Congress to pass the Equality Act. The legislation would expand federal civil rights law to prohibit LGBTQ and gender identity discrimination in public accommodations.

The Biden administration has been behind several progressive steps for the LGBTQ community, including the first use of the gender-neutral gender marker on passports by the State Department and the reversal of the Trump era rule that Title IX does not protect LGBTQ students.