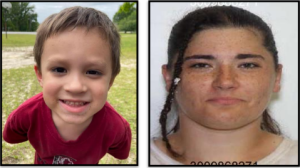 (Courtesy: KCSO) Jasper Garcia, 3 (left) has been found safe, while his mother, Vanessa Weatherford (right) has been arrested.

KERSHAW CO., S.C. (WOLO) – Kershaw County deputies say a 3-year-old boy has been found safe while his mother was arrested after vehicle pursuit this morning.

According to investigators, Garcia was taken from his legal guardian by Weatherford, his biological mother, without permission in the Bethune area on Monday.

They also say she doesn’t have legal custody of the child.

She faces numerous charges in Kershaw and Chesterfield.