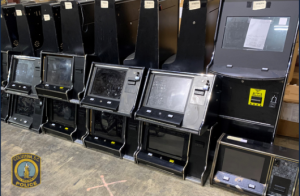 Investigators say Anthony Hopkins is charged with Operating a Gaming House, Keeping Unlawful Gaming Tables, Possession of a Handgun by a Person Convicted of a Crime of Violence, and Possession of Marijuana.

Investigators say Hopkins has been running the gambling operation for about two years.

In addition police say three people ranging in age from 68 to 83 were all cited for Unlawful games and betting.