The president was visiting the hard-hit city of Fort Myers. 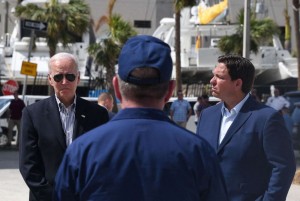 The two leaders, often political opponents, have momentarily put politics aside to respond to the historic storm, which is shaping up to be one of Florida’s deadliest and costliest in decades. Making landfall as a Category 4 hurricane, Ian leveled the coast, knocking out power to millions. At least 100 people died.

DeSantis and his wife, Casey DeSantis, greeted Biden and first lady Jill Biden upon their arrival at Fisherman’s Wharf for an operational briefing. FEMA Administrator Deanne Criswell, Republican Sens. Rick Scott and Marco Rubio, and other local officials were also at the site.

Biden spoke with local residents affected by the storm, offering handshakes and hugs as he toured damage at the marina’s. The area was filled with debris, fallen trees, downed electric lines and boats and yachts tossed into piles.

Earlier in the day, the Bidens took an aerial tour to get a wider look at the storm’s devastation before meeting with the governor.

“I’m sure it’s much worse from the ground,” Biden said. “But you can see a whole hell of a lot of damage from the air.”

Biden touted his administration’s response so far and emphasized the federal government’s ongoing commitment to the people of Florida as they recover and rebuild, which he said will take years.

“We’re not leaving till this gets done. I promise you that,” Biden said.

Ahead of the visit, the White House said Biden would announce he is doubling the length of time the federal government will cover all the costs associated with search and rescue, debris removal, sheltering and other emergency measures from 30 days to 60 days.

Desantis had requested the aid extension last week. In response to the announcement, he told reporters, “It’s important, but we may need more.”

Biden said 4,000 federal personnel are on the ground in Florida and the Southeast. Search and rescue teams have knocked on over 70,000 doors, he said, with 3,800 people. He also discussed more ways the federal government can help with other actions FEMA, the Small Business Administration and the Department of Housing and Urban Development.

Wednesday’s visit was the first face-to-face meeting between Biden and DeSantis since the governor ordered migrants flown from Texas to Martha’s Vineyard, which the White House this week continued to slam as a “political stunt.”

Biden and DeSantis have put politics aside to respond to Hurricane Ian, as they spoke several times before and after the storm hit as Biden issued emergency declarations.

“I want to thank President Biden and Jill Biden as well as Administrator Deanne Criswell for coming down here looking at a really really significant damage here in Lee County and there’s other places where you have really significant damage as well outside of this general area,” DeSantis said Wednesday.”We were very fortunate to have good coordination with the White House and with FEMA from the very beginning of this.”

The Florida trip came just days after Biden traveled to Puerto Rico, which was hit by Hurricane Fiona last month

The Category 1 storm hit the island on Sept. 18, knocking out power for most of the U.S. territory’s residents and killing at least 13 people. As of Biden’s visit, more than two weeks after the storm, more than 100,000 people were still without power.

During his visit to Port of Ponce, on the south side of Puerto Rico, Biden announced more than $60 million in federal funding to help the island better prepare for extreme weather events in the wake of Hurricane Fiona.

“Puerto Rico is a strong place, and Puerto Ricans are strong people,” Biden said as he spoke at the Port of Ponce. “But even so, you have had to bear so much and more than need be, and you haven’t gotten the help in a timely way.”

Some retailers closed on Thanksgiving