The next drawing is Saturday night. 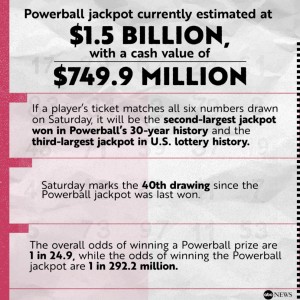 The next drawing is Saturday night, marking the 40th Powerball drawing since the jackpot was last won in Pennsylvania on Aug. 3. The cash value of Saturday’s jackpot is $745.9 million, according to a press release from Powerball.

If a player’s ticket matches all six numbers drawn on Saturday night, it will be the second-largest jackpot won in Powerball’s 30-year history and the third-largest jackpot in U.S. lottery history, only behind the world record $1.586 billion Powerball jackpot in 2016 and the $1.537 billion Mega Millions jackpot in 2018. If no one wins Saturday’s jackpot, it will tie the game record for the number of drawings in a row without a grand prize winner, Powerball said.

Although there was no jackpot winner in the last drawing on Wednesday night, more than 7.2 million tickets won cash prizes totaling $74.9 million. The overall odds of winning a prize are 1 in 24.9, according to Powerball.

The jackpot grows based on game sales and interest. But the odds of winning the big prize stays the same — 1 in 292.2 million, Powerball said.

Jackpot winners can either take the money as an immediate cash lump sum or in 30 annual payments over 29 years. Both advertised prize options are prior to federal and jurisdictional taxes, Powerball said.

Tickets cost $2 and are sold in 45 U.S. states as well as Washington, D.C., Puerto Rico and the U.S. Virgin Islands. More than half of all proceeds remain in the jurisdiction where the ticket was purchased, according to Powerball.

Powerball drawings are broadcast live every Monday, Wednesday and Saturday at 10:59 p.m. ET from the Florida Lottery draw studio in Tallahassee. The drawings are also livestreamed online at Powerball.com.

Generation Z most eager to hunt for shopping deals