AP: Tim Scott heading back to US Senate as bigger ambitions loom

U.S. Sen. Tim Scott won reelection Tuesday to what he said will be his last term serving South Carolina, but the only Black Republican in the Senate may have bigger political ambitions yet. 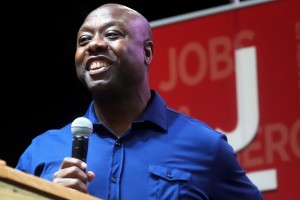 COLUMBIA, S.C. (AP) — U.S. Sen. Tim Scott won reelection Tuesday to what he said will be his last term serving South Carolina, but the only Black Republican in the Senate may have bigger political ambitions yet.

Scott beat Democratic state Rep. Krystle Matthews for a second full term. He was appointed to the U.S. Senate in 2013 by then Gov. Nikki Haley when Jim DeMint resigned and also won a special election.

Scott, 57, has spent about as much time helping other Republicans as he has campaigning in 2022. He released a memoir called “America, A Redemption Story,” where he tells his story of being raised by a single mother and his rise as a Black Republican in South Carolina.

Scott has remained coy about any plans beyond winning reelection. He has been mentioned as a possible presidential candidate in 2024 or later depending on how the field shapes up. Scott has made several trips to Iowa and other states that get an early say in the presidential nomination process.

Shortly after his re-election victory was announced the S.C. GOP released a statement saying in part,

“We’re happy to extend an expected congratulations to Senator Tim Scott on his reelection! His conservative message attracts voters and resonates with real people across South Carolina….We look forward to continuing to work Senator Scott and his mission of bringing more people into our Party and advancing our conservative platform.”