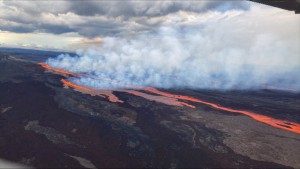 (ABC News) — Ash and lava have begun spewing out of the Mauna Loa volcano on Hawaii’s Big Island — the largest active volcano in the world.

The activity, which began Sunday around 11:30 p.m. and continued into Monday, is the first eruption from Mauna Loa in nearly 40 years.

The lava was contained to the summit, and there are currently no threats to populated areas, according to the U.S. Geological Survey.

However, the eruption has migrated from the summit to the northeast rift zone, where fissures are feeding several lava flows, according to the USGS, which advised residents at possible risk from Mauna Loa lava flows to review preparedness and refer to Hawaii County Civil Defense information for further guidance.

Lava flows are significant enough to be visible from Kona, dozens of miles away.

Mauna Loa is so large it takes up more than half of the Big Island. The last time it erupted was in March and April 1984.

The volcano has erupted dozens of times since the 1880s, allowing volcanologists to get to know its “personality,” Michael Poland, research geophysicist for the USGS Cascades Volcano Observatory, told ABC News. This means that scientists are predicting that the flow will likely abate now because the initial eruptions are typically the heaviest.

Since the eruption is occurring to the northeast, where the peak’s slope seaward is more gentle, it would take weeks of a continuous eruption for it to reach Hilo, Poland said.

Gov. David Ige told ABC News Live that he was not yet worried about any impact on Hawaiians.

“I think right now we’re not that concerned,” Ige said. “The eruptions and the fissures are very high up. … In fact, there really is no communities or no structures anywhere close to the fissures that are erupting right now.”

“It will take weeks, if not longer, of eruptions occurring in order for the Northeast Rift Zone eruption to reach any kind of community or get close to any infrastructure,” the governor added.

Video posted to Twitter by the U.S. Geological Survey’s Hawaiian Volcano Observatory shows thermal footage of the lava flowing out of the volcano’s summit.

Nice photo from the Park showing the two eruptions. Visible is the Mauna Loa eruption in the upper right and the glow from Kīlauea’s lava lake in the lower left. https://t.co/B7lJ0ajlYF

In conjunction with the lava flow, there were more than a dozen earthquakes in the region of more than 2.5 magnitude early Monday morning, according to the USGS.

Lava was still erupting from the summit and was overflowing from the caldera Monday, according to USGS Volcanoes. The National Weather Service issued an ashfall advisory for depositing ash and debris, as well as light accumulation of ash on vessels, until 6 a.m. along the Alenuihaha Channel, Big Island windward waters, Big Island leeward waters and Big Island southeast waters.

The NWS advised that vessels should remain at port or avoid advisory areas, and those with respiratory sensitivities should take extra precautions to minimize exposure.

Falling volcanic ash and debris can also render engines or electronics inoperative, according to the NWS.

Hawaii is home to several active volcanos, including the Kīlauea volcano on the Big Island, one of the most active in the world.

Volcano activity has been recorded all around the globe over the past year.

Major eruptions could be underway from two volcanoes on Russia’s Kamchatka Peninsula after clouds of ash and lava began spewing on Nov. 20.

In July, an eruption at the Sakurajima volcano in Japan prompted evacuation orders for residents nearby in the southwestern prefecture of Kagoshima.

And last week, marine geologists announced that the underwater volcano eruption that occurred on Jan. 15 in the Tongan archipelago in the South Pacific Ocean is the largest ever recorded.