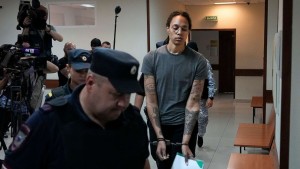 The basketball star was taken into custody at a Moscow area airport earlier this year in possession of vaping cartridges containing hashish oil, an illegal substance in Russia.Griner pleaded guilty and was sentenced to nine years in prison.
ByJustin Fishel andMark Osborne

USC Women’s Basketball Coach Dawn Staley, who has been a vocal advocate for Griner’s release tweeted the following the announcement.

God’s grace is SUFFICIENT! @brittneygriner is home! I love you BG!