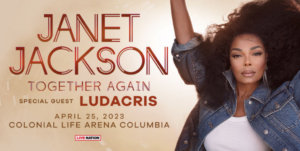 COLUMBIA, S.C. (WOLO)— Colonial Life Arena announced the iconic Janet Jackson is coming to Columbia! The Together Again Tour is set to make a stop in Columbia on April 25, 2023.

Jackson first made her mark in the entertainment industry with her television roles in The Jacksons, Good Times, Diff’rent Strokes, and is known for her lead role in Poetic Justice. Her studio albums  spawned hit singles such as All for You, Nasty, Rhythm Nation, Together Again, and many others.

The multi-hyphenated artist Ludacris will also be making an appearance as a special guest.