Musk polled Twitter users and said he would abide by the results.

“I will resign as CEO as soon as I find someone foolish enough to take the job! After that, I will just run the software & servers teams,” he tweeted. 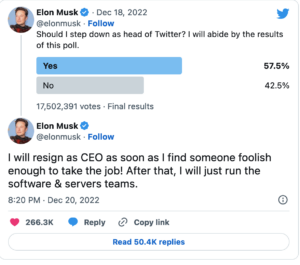 Musk polled Twitter users Sunday night on whether he should step down as head of the company.

“I will abide by the results of this poll,” Musk had pledged Sunday night.

“As the saying goes, be careful what you wish, as you might get it,” he also tweeted Sunday, later adding: “Those who want power are the ones who least deserve it.”

Musk, who acquired Twitter in October, helms electric carmaker Tesla and spacecraft company SpaceX. He said on Sunday that he has not selected a successor for the top position at the social media platform.

“No one wants the job who can actually keep Twitter alive,” Musk said.