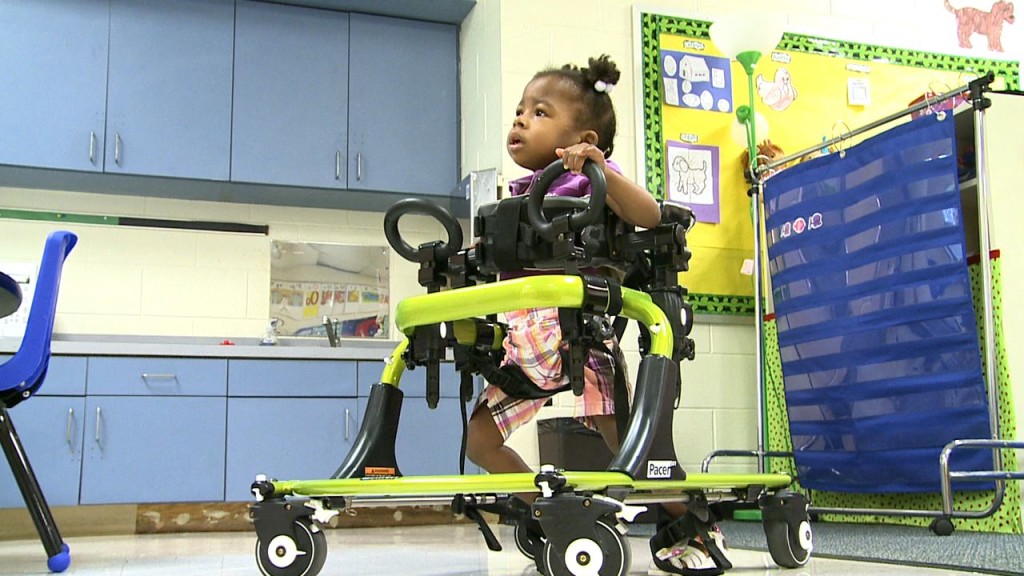 COLUMBIA, S.C. (WOLO) — Three and a half year old Kenyatta Jackson was born sixteen weeks premature. At birth she weighed just over one pound. Doctors told her Mom there was little hope that she would ever be able to walk, talk, or even go to school. But, Kenyatta is determined to find a way.” “She is such a sweet little girl, everybody loves Kenyatta,” says Lauren Easter, Special Education teacher at Bethel-Hanberry Elementary School in Blythewood. By looking at Kenyatta, it’s hard to imagine that she spent the first eight months of life in the hospital. Born at just 24 weeks, the odds were against her. But, she isn’t letting that stop her. “She’s a very determined little girl,” says Easter, who teaches Kenyatta. When the doctors said no, Kenyatta said yes. “She’s just reaching those milestones and surpassing what all the doctors thought she would,” says Easter. For the past year, Kenyatta has worked to overcome the odds. She’s learning to talk. A specialized chair helps to stabalize her so that she can sit at the table and learn with other children. Kenyatta has even learned to color, all of which her Mom was told would most likely never happen. Yet, out of all of her accomplishments is one of the biggest, Kenyatta is learning to walk. “Her gate trainer keeps her up and helps her leg muscles strengthen,” says Easter. And just two weeks ago, a break through as Kenyatta took her first steps. And now Kenyatta is taking on another task, learning to ride a bike. “She wants to do everything the other kids do,” says Easter. Something that’s getting even closer with every step. “I’ve never met a child that so determined and so easy to love, she has the best smile, you’ve ever seen, she just makes your day better by looking at her,” says Easter.