Clemson Sticks It To Seminoles, 35-30 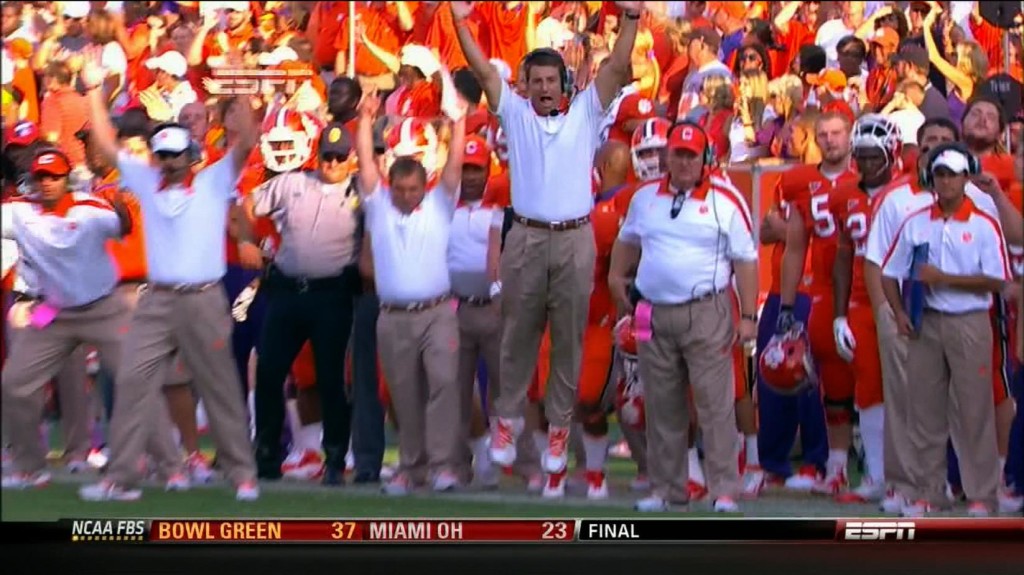 CLEMSON, S.C. — Clemson’s Chad Morris can’t wait to see what happens when the 21st-ranked Tigers truly master his offense. Not that things have gone too badly so far. No. 21 Clemson knocked off a ranked opponent for the second straight week as Tajh Boyd threw for three touchdowns and ran for another in a 35-30 victory over No. 11 Florida State on Saturday. The Tigers opened 4-0 for the first time since 2007 and got a leg up in the ACC Atlantic Division by holding off last year’s divisional champion Seminoles (2-2, 0-1 ACC). And Clemson accomplished it with an offense led by first-year coordinator Morris that piles up yards, strikes for big plays and finds openings at the most critical times. It was the Tigers’ fourth game this season with 455 yards or better and Boyd’s second straight with 300-plus passing yards. “I’m super excited about how our players keep growing this offense and executing. And we’re only four games into this offense,” Morris said. “It’s crazy.” Clemson again struck best through the air. Boyd had 344 yards on 23 of 37 passing. Freshman Sammy Watkins continued his stellar year with eight catches for 141 yards and his fifth and sixth touchdown catches of 24 and 62 yards. Andre Ellington added 71 yards rushing, tied for the most the Seminoles have allowed this year. Yet, Boyd said Clemson has had to overcome the doubters this year, those who feel the Tigers haven’t progressed that far from their 6-7 season of 2010. “We believe in ourselves so much as a team,” Boyd said. “We’re watching ESPN and all three people say we’re not going to win the game. We feed off of that.” Florida State played without starting quarterback EJ Manuel, hurt in last week’s 23-13 loss to top-ranked Oklahoma. Backup Clint Trickett kept the Seminoles in this, though, with 336 yards and three touchdown passes. His 9-yard touchdown throw to Kenny Shaw brought Florida State to 35-30 with 7:21 to go. The Seminoles had one final chance and Shaw, taken from the Oklahoma game in an ambulance after a crunching hit, was open at midfield on the final drive but didn’t make the catch. Trickett was sacked by lineman Rennie Moore on fourth down and the Tigers ran out the clock. When it was over, Tiger fans and players celebrated like they’d won a national title, swarming the field after beating Florida State the way they had a week earlier when they ended the 17-game win streak of defending BCS champion Auburn at Death Valley. The Seminoles were ranked fifth in the country two weeks ago and considered a national championship contender. Now, they’re not even tops in the ACC Atlantic after their second straight defeat. “It’s not going to be hard” to rebound, linebacker Vince Williams said. “It’s just part of the process. This is one game. That’s how we look at it.” Florida State gets a week off to heal — cornerback Greg Reid and receiver Bert Reed were also absent with injuries they’ve had this season — before it returns to action at Wake Forest on Oct. 8. Some thought Boyd and the Tigers would wilt under Florida State’s defensive speed and pressure. Clemson got a bonus, though — several critical mistakes by the Seminoles. A pass interference call on cornerback Xavier Rhodes kept the Tigers opening drive alive on third-and-7 and Watkins finished things off three plays later with a 24-yard touchdown grab. Florida State’s defense stuffed Ellington on third-and-short to force a punt on Clemson’s second series, but a penalty on safety Lamarcus Joyner for running into punter Dawson Zimmerman gave the Tigers back the ball. Boyd found DeAndre Hopkins for a 50-yard strike to the Seminoles 2 as the Death Valley crowd chanted Hopkins’ nickname, “Nuuuuuke.” Boyd scored from a yard out to put Clemson ahead 14-3. The Seminoles were called for another pass interference on Clemson’s final scoring drive of the first half and Boyd made them pay once more on tight end Dwayne Allen’s 12-yard scoring run for a 21-10 lead. Trickett, who took all the snaps in practice this week, was effective in some spots and lost in others. He launched a beautiful ball to Rodney Smith for a 57-yard catch, the Seminoles’ lone TD in the first half. But on Florida State’s next series, threw right to Clemson linebacker Quandon Christian deep in Seminoles territory. Boyd’s awful decision to throw the ball while stumbling to the ground gave Florida State a touchdown when defensive end Bjoern Werner easily picked it off and returned it 25 yards to cut things to 21-17. Ellington regained control for the Tigers when his 1-yard scoring run ended an 11-play drive with 3:03 remaining. While Florida State tightened up its defense in the second half, it kept hurting itself with penalties. The Seminoles ended with 11 penalties for 124 yards. Trickett, the son of FSU offensive line coach Rick, was 24 of 38 with an interception and two sacks, both in the second half. Smith had four catches for 118 yards. The Seminoles again couldn’t get much going on the ground with 29 yards rushing. Copyright 2011 The Associated Press.