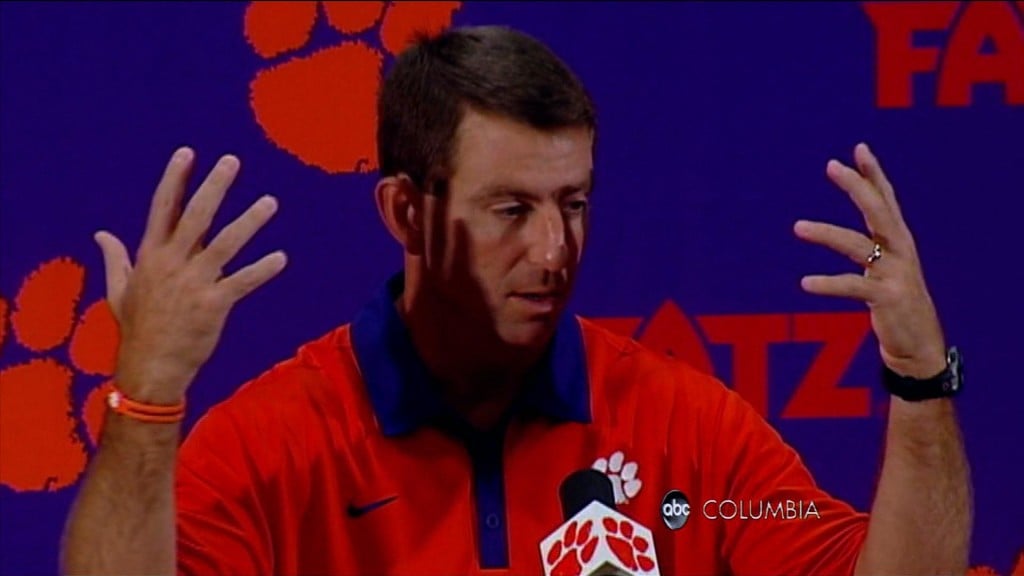 CLEMSON, S.C. (AP) — Clemson’s almost done with the killer stretch coach Dabo Swinney called the “schedule of champions.” Right now, it’s the Tigers who’ve stood tallest of all. Clemson improved to 4-0 for the first time in four years with a 35-30 victory over Florida State and rose eight spots in the national rankings to No. 13. It’s been a surprising run for the Tigers, who knocked off defending national champion Auburn (38-24) two games ago before beating the ACC Atlantic winning Seminoles. Clemson opened the year with Sun Belt champ Troy and Southern Conference co-champions Wofford its first two games. Next up comes ACC champion Virginia Tech, a school the Tigers haven’t beaten since 1989 when Swinney was still dreaming of catching passes in college for Alabama. Swinney recalled telling his players when the schedule came out last spring, “Hey, you want to be champions? You’ve got the schedule for it.” Clemson may have the players for it, too. Quarterback Tajh Boyd passed for 344 yards against Florida State (2-2, 0-1) after throwing for 386 yards to beat Auburn. He’s thrown 13 touchdowns and just one interception after what looked like an embarrassing pick returned for a touchdown by Seminoles defensive end Bjoern Werner was officially changed Sunday to a lost fumble. Freshman Sammy Watkins struck for his fifth and sixth touchdowns, including a 62-yard score with 13:06 left that kept Clemson out front after Florida State had cut the lead to 28-23. The Tigers defense showed out when it counted, as well. Florida State gained only 29 yards on the ground. Defensive lineman Rennie Moore ended things with a fourth-down sack of freshman quarterback Clint Trickett, playing for the injured EJ Manuel. “We’ve got the opportunity, if we take care of business, to make ourselves relevant,” Swinney said. That didn’t look probable entering the season. Clemson came off its first losing season in 12 years at 6-7, Boyd was a first-time starter running the complex offense of new coordinator Chad Morris. Some fans at Death Valley opening week booed the team as it left at halftime trailing Troy 16-13. The Tigers rallied to win that one, 43-19, and have rarely slowed down since. They put up 624 yards of offense against Auburn – third highest total in school history – and led Florida State for all but the first eight minutes. “This team is really starting to come together and we’re realizing what this offense can do,” Boyd said. Florida State must realize what’s gone wrong and get it fixed. Injuries have been a problem. Besides Manuel, the Seminoles played without receiver Bert Reed and cornerback Greg Reid. But lack of a running game also cost them. Florida State used Chris Thompson in a wildcat look several times in the first half until Clemson adjusted. Then it was left to Trickett to rescue the Seminoles – and he almost did. Trickett passed for 336 yards and three touchdowns. He appeared to find Kenny Shaw wide open at midfield on Florida State’s final drive, but the receiver couldn’t make the play. Seminoles coach Jimbo Fisher said the team will use its upcoming off week to correct its mistakes. Florida State was No. 5 in the country two weeks ago, but fell to No. 23 on Sunday after consecutive losses to top-ranked Oklahoma and the Tigers. “We still have a chance to be a very good football team,” Fisher said. “We have to coach them better. We have to get them in better position and get the details out of them.” Clemson must pay attention to details, too, as it preps for its first road game of the season. No. 11 Virginia Tech hasn’t faced a schedule anywhere near as tough as Clemson’s yet. “But they’re the ACC champions until someone says differently,” Swinney said. Swinney hopes his guys might have something to say about that this week. Sure, they’re young at the skill positions, but Swinney said the Tigers have leadership in the trenches with upperclassmen like Dalton Freeman and Landon Walker on the offensive line and Moore, Brandon Thompson, Andre Branch and Mallichiah Goodman on the defensive line. How will his team handle 4-0? “Just like they handled 1-0, 2-0 and 3-0,” Swinney said.