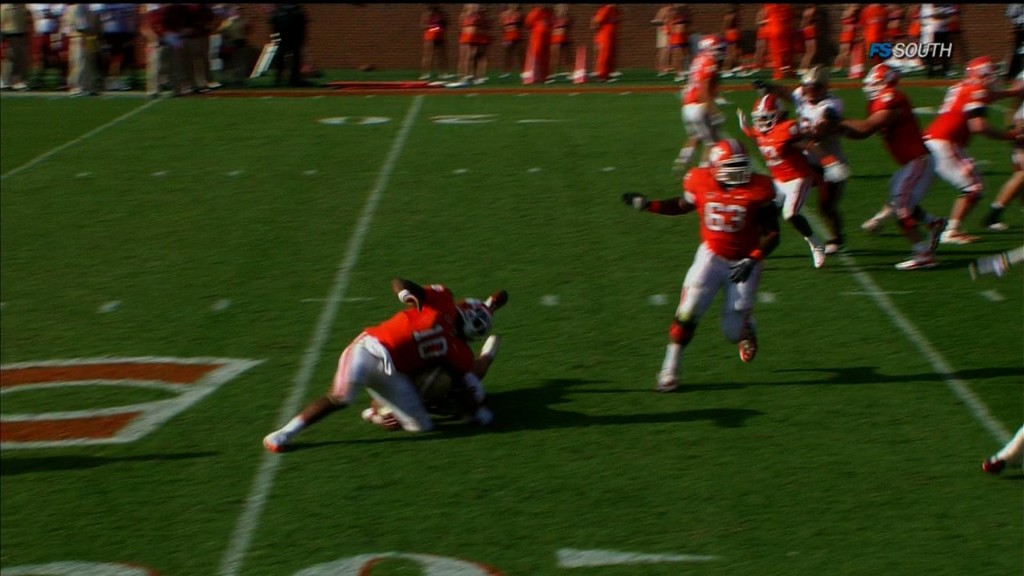 CLEMSON, S.C. (AP) — Tajh Boyd’s play again gave No. 8 Clemson reason to celebrate. A hard hit to Boyd’s hip left the Tigers wondering how many more of those celebrations they’ll be having. Boyd passed for a touchdown and ran for another as the Tigers continued their best start in 11 years with a 36-14 victory over Boston College on Saturday. But Boyd had to leave the field in the third quarter with his injury, the severity of which remains unknown — along with Boyd’s status for next week at Maryland. “It’s a complete waste of time to speculate,” Clemson coach Dabo Swinney said. ACC blog ACC ESPN.com’s Heather Dinich writes about all things ACC in the conference blog. “¢ Blog network: College Football Nation Although Swinney acknowledged things might not be as bad as they looked to the crowd of 78,000 who held their breath as Boyd lay on the ground. X-rays taken on Boyd showed no broken bones. An MRI at Oconee Medical Center confirmed that diagnosis. Swinney said Boyd was walking around the locker room much better than when he initially left the field. “We’re praying for positive news there,” Swinney said. As is everyone who roots for the Tigers (6-0, 3-0 Atlantic Coast Conference). Boyd’s been a revelation as a first-year starter, strong and poised with a knack for making the right decisions. He’s thrown 15 touchdown passes, including a 3-yarder to Jaron Brown on Saturday, to just two interceptions. “It doesn’t look like it’s going to be too serious,” Clemson tailback Andre Ellington said. Chandler Catanzaro added five field goals while Ellington rushed for 117 yards and a 36-yard TD in the fourth quarter that sealed things for the Tigers. If Boyd can’t go, Cole Stoudt — son of former NFL quarterback Cliff Stoudt — would get the start against the Terps. Tigers offensive coordinator Chad Morris will keep the gas pedal pressed on his fast-paced offense with Stoudt in there. “Cole’s fine. Cole’s going to be a great quarterback here,” Morris said. “We’ve got to make sure that we continue to push him.” Stoudt has a few off-target throws, but ended a respectable 6 of 10 for 37 yards. He led the Tigers to a field goal and Ellington’s TD when Boston College (1-5, 0-3) cut the lead to 26-14. “I know in practice, the team’s going to help me get better,” Stoudt said. “I’m going to build off them.” Swinney was hopeful that Boyd had nothing more severe than a deep muscle bruise and could start next week. Plenty of Clemson supporters hope that, too. The Eagles played without ACC preseason player of the year Montel Harris, who aggravated a knee injury in last week’s loss to Wake Forest. Boyd, a sophomore, had thrown for 200 yards or more each game this year and was on his way to a third 300-yard performance when, with Clemson ahead 23-7, he was hit by Boston College defensive end Max Holloway. Boyd tried to get up but rolled back to the ground as coaches, teammates and trainers surrounded him. Death Valley, 78,000 strong for homecoming, was silent as Boyd remained on the ground. He was finally carried off the field, his left leg held above the turf. He was taken to the locker room for X-rays and Clemson announced he had a hip injury. “He was scrambling out and went and grabbed a hold of his leg and I guess he fell awkwardly,” Holloway said. “He kind of yelled when he hit the ground, so I figured he was hurt.” Boston College tried to catch Clemson groggy after Boyd’s departure, Chase Rettig’s 24-yard pass to Bobby Swigert cutting the lead to 26-14. The Tigers, though, found their footing with Stoudt. Catanzaro added a 47-yard field goal and Ellington broke out for a 36-yard touchdown run on fourth-and-1 to seal the victory. The Tigers finished with 500 yards, the fifth time in six games they’ve gained 440 yards. But can they keep it up if Boyd is out? After Maryland, the Tigers return home to play North Carolina. An ACC showdown at Georgia Tech comes after that. Boyd was 16 of 26 for 283 yards. He also had 37 yards rushing. The Tigers to put this one away early, scoring on its first three possessions to go up 17-0. Morris emphasized all week that his guys hadn’t put up a TD against Boston College since 2008. They quickly brushed off that monkey on Boyd’s 3-yard scoring pass to Jaron Brown to finish an eight-play, 80-yard drive that lasted less than three minutes. Clemson was back at it a series later, Catanzaro hitting the first of three field goals in the opening half. The defense got into the act moments later, Malliciah Goodman sacking Rettig and causing a fumble that Tyler Shatley recovered on the BC 16. Boyd ran it in for a 14-yard touchdown three plays later. “They got rocket-shipped out of there at 17-0 really fast,” Boston College coach Frank Spaziani said. The Eagles have had their successes at Death Valley — they’ve won two of the three times they’ve played here since joining the ACC in 2005 — but appeared lost without injured star Harris and his backup, Andre Williams. Harris had rushed for over 100 yards a week ago against Wake Forest but aggravated a knee injury that kept him out of all but two games this season. Williams didn’t play because of an ankle injury. Then again, Boston College didn’t help itself much, either. Besides Rettig’s fumble, the Eagles’ had a 43-yard touchdown catch by Bobby Swigert wiped out by a personal foul. They gained less than half of Clemson’s first-half yardage, 142 to 295, and could not slow the Tigers. When Boston College finally scored on Rolandan Finch’s 20-yard touchdown run with 1:55 to go, Clemson followed with a 65-yard drive that concluded with Catanzaro’s 18-yard field goal for a 23-7 halftime lead.