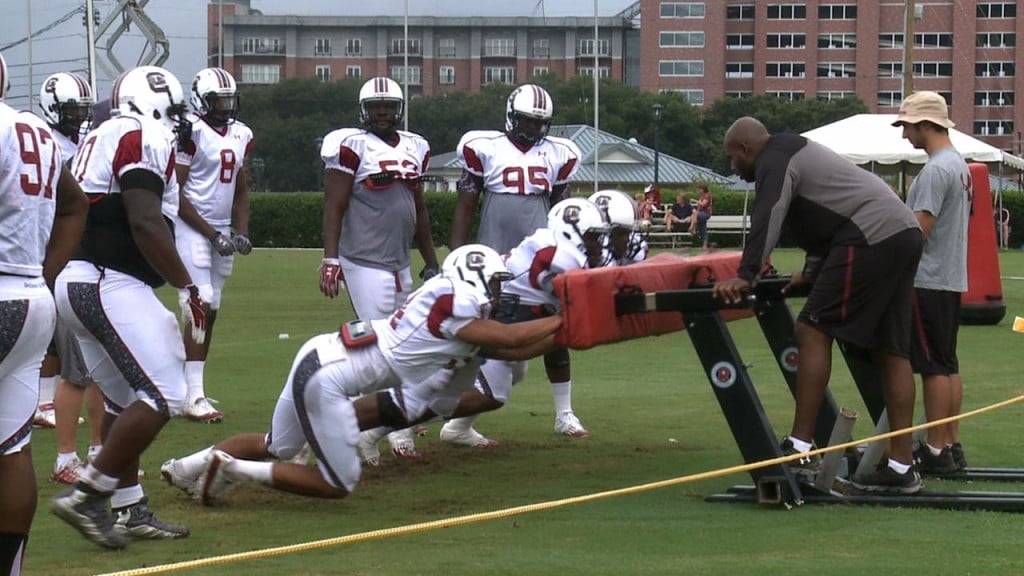 COLUMBIA, S.C. (USC SID) — The University of South Carolina football squad went through another two-hour workout Friday morning in full pads as it continued preparations for the season opener at Vanderbilt on Thursday, August 30. South Carolina men‘s basketball coach Frank Martin was on hand to speak to the team during the midpoint break of the practice session. Walk-on wide receiver Sidney Rhodes was moved to cornerback. He wore number 30. Rhodes is a redshirt sophomore from Easley, S.C. Reserve cornerback Cadarious Sanders has left the team and will look to transfer, head coach Steve Spurrier confirmed following practice. The redshirt sophomore from LaGrange, Ga., saw limited action in eight games last season, recording four tackles. Defensive end Jadeveon Clowney (groin/knee) and wide receiver DeAngelo Smith (shoulder) were held out of Friday‘s practice, as were cornerbacks Victor Hampton (quad bruise) and Akeem Auguste (groin). Tight end Justice Cunningham returned to practice after missing a couple of days with an upper back spasm. The Gamecocks will practice again on Saturday, beginning at 3:45 p.m. at Williams-Brice Stadium. The second half of the practice will be a scrimmage. That practice is open to the public. Photography (still or video) will be allowed for the first 15 minutes of practice only. Sunday is Fan Appreciation Day at Colonial Life Arena. The event runs from 12:30-2:30 p.m. Fans are reminded that the student-athletes are allowed to sign only the official team posters that will be provided for free at the event. Parking is free in the CLA lots.