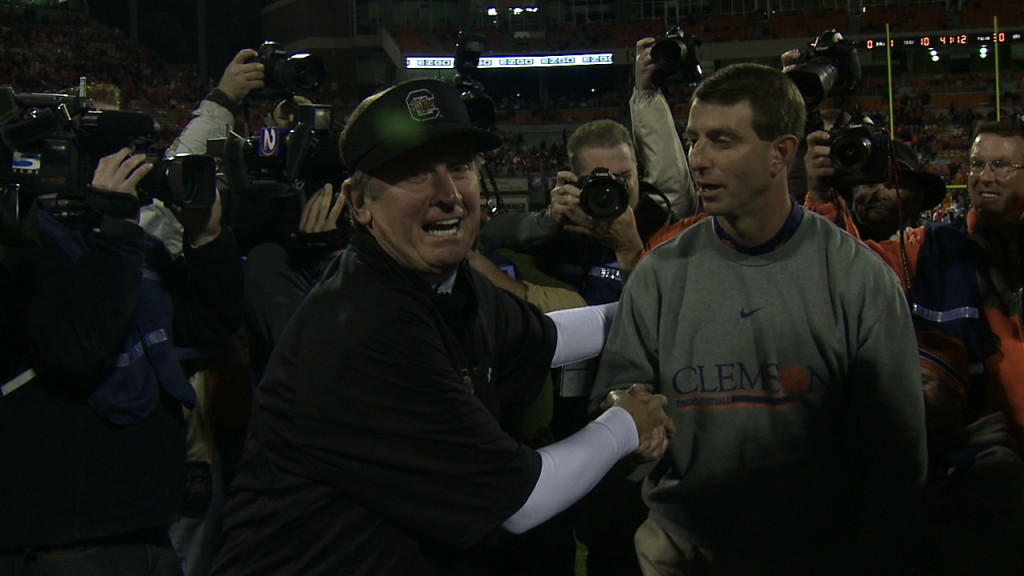 COLUMBIA, S.C. (AP) — South Carolina coach Steve Spurrier could earn himself another statue if his 13th-ranked Gamecocks defeat No. 12 Clemson this weekend. South Carolina (9-2) could pull off its fourth-straight victory in the rivalry, something the Gamecocks have accomplished once in the series that was first played in 1896. Spurrier can also become the program’s all-time wins leader with 65 victories, surpassing Rex Enright’s mark he tied a week ago. “I hadn’t thought about that too much lately, really,” Spurrier said Tuesday. “Us against them is big enough to talk about, probably.” Spurrier has joined Paul “Bear” Bryant, as the only coaches to hold such marks at two Southeastern Conference schools. Bryant is the career leader at Alabama and Kentucky. “Those are one of those where when your coaching days are over you look back and say, `What was his record?”’ Spurrier said. “At the moment, I don’t think it’s that big a deal. The bigness of this game is who wins between us and them.” With another series win over Clemson (10-1), the Gamecocks will match the feat only accomplished from 1951-54. And it would certainly mean Spurrier’s name would replace Enright’s on the outside of the spiral ramp at Williams-Brice Stadium, where such achievements are honored. It took some work to gain control of the rivalry since Spurrier replaced Lou Holtz after the 2004 season. Clemson had won seven of eight before Spurrier’s arrival and the head ball coach lost three of his first four matchups with the Tigers. The past three years, it’s been all Gamecocks – and by decisive margins. South Carolina won 34-17 in 2009, 29-7 in its last visit to Clemson and 34-13 last year. Spurrier believes the turnaround is a result of improved players, better coaches and mistake-free play. “All that kind of stuff,” Spurrier said. “Every year, you try your best to beat everybody you play. It works out that we’ve played well the last three years.” The Tigers are playing well offensively. They’ve averaged more than 535 yards and 44 points a game this season. They’ve surpassed 700 yards of offense in two of their past three games, including a 754-yard effort to beat North Carolina State, 62-48, last Saturday. Clemson quarterback Tajh Boyd is seventh national in total offense at 348 yards a game and leads the nation in point responsibility. He’s thrown 33 touchdowns and rushed for eight more. Spurrier knows a thing or two about offense and is very impressed. “If they could have held on down there at Florida State that game, we’d be talking about these guys playing for the national championship,” he said. “Tajh Boyd would be up for the Heisman Trophy.” The difference in Clemson’s stretch run, coach Dabo Swinney said is Boyd’s growth. He’s better at managing the system, improved his running skills and maneuverability and makes fewer mistakes than other seasons. “I don’t know of a quarterback in the country playing better than Tajh Boyd,” Swinney said. “I can’t imagine a player who means more to his team than this guy.” The Gamecocks chances could hinge on a couple of lingering injuries. Quarterback Connor Shaw, who accounted for 317 yards in last year’s game, won’t practice much this week with a recurring foot problem. The injury could have kept him out of last week’s game against Wofford had Shaw told the coaches how much it hurt. “He kept saying he was alright and he’d finish out,” Spurrier said. Star defensive end Jadeveon Clowney, already dealing with a foot problem, had an MRI that uncovered a bruise beneath a kneecap. Defensive coordinator Lorenzo Ward expected Clowney, third in SEC sacks, back in the lineup after missing the Wofford game. If it’s a rivalry week, count on a zinger from Spurrier. This time, the head ball coach played off Swinney’s rant following last year’s defeat that “Carolina is in Chapel Hill and USC is in California. The university in this state, always has been, always will be — Clemson.” Spurrier said Tuesday those words didn’t bother him much. “I guess Dabo, I found out he loves Southern California and the University of North Carolina,” Spurrier cracked. “That’s the only thing I know about him.”